For the 29th consecutive year, representatives from the entire entrepreneurial and political spectrum as well as members of the Bakery & Pastry institutional bodies, were present in full force at the opening ceremony of the ARTOZA trade show.

The conference room where the opening ceremony took place, was packed early by the exhibitors and also a lot of visitors of the bakery & pastry sector. First of all, Mr. Nikos Choudalakis, President & Managing Director, of the organizing company FORUM SA, at his speech said that: “Few exhibitions have endured over the years such as ARTOZA, which despite the economic crisis of the recent years, not only stayed upright but evolved into a brilliant exhibition and one of the most successful exhibitions of its kind in Greece and internationally “.

On the left: Nikos Choudalakis President and CEO of FORUM SA, On the right: Stergios Pitsiorlas, Deputy Minister of Economy & Development

Mr.Κonstantinos Michalos, president of the Central Union of Chambers of Greece, also during his speech, noted that the goal is to take advantage of the financial stability of our country that seems to be recovering in favor of the future of the sector. Mr. George Kavathas, President of the The Hellenic Confederation of Professionals, Craftsmen & Merchants (GSEVEE), congratulated the organizers for the high organizational level and noted that small and medium enterprises contribute to the growth of the economy and that is why we should support them.Mr. Yiannis Glykos, President of the Greek Pastry Professionals’ Federation, and Michalis Mousios, President of the Hellenic Bakers federation, during their greetings praised the exhibition and its importance over the years to the development of the bakery and pastry industry and wished good success to all the participants.

The greetings of the opening ceremony, ended with the one of the Deputy Minister of Economy and Development, Mr. Stergios Pitsiorlas, who stepped up at the scene and during his speech praised the exhibition that for three decades supports one of the most traditional branches of the economy of our country, stressing its important role in the development of its rapid growth in recent years.

Honorary awards that moved the audience

Then, in an emotional atmosphere, followed a special ceremony, during which seven important personalities were honored for their recognition and great contribution to the industry. The honorary awards was an initiative of FORUM SA and the two Federations, the Greek Bakery Federation and the Greek Pastry Professional’s Federation.

Pavlos Sinikis, who was awarded by the General Secretary of Industry Apostolos Makrykostas thanked the organizers of the exhibition for the honor. George Stergiou, whose family business counts 60 years, received his prize from George Kavathas, President of the President of The Hellenic Confederation of Professionals, Craftsmen & Merchants (GSEVEE) and, as he said, “This award is a satisfaction of all the efforts and the offer of its services for the rise of the sector”. In a climate of emotion, Giorgos Antoniadis, the virtuoso baker, also received the 29th prize of his career  by Konstantinos Mihalos, president of the Central Union of Chambers of Greece.

Manolis Kotsikas, a former president of the Hellenic Pastry Professional’s Federation failed to attend due to health reasons but the award was received on his behalf by the President of the Hellenic Pastry Professional’s Federation, Giannis Glykos. Elias Exarchos, former President of the Hellenic Bakers Federation, was awarded by the President of Bakers of Greece, Michalis Mousios, and said this award is of great value to him as he comes from his “own” people. Subsequently, Dimitris Asimakopoulos, former President of GSEVEE and HPPF, went on stage to receive his prize from Nikos Choudalakis, President and CEO of the organizing company FORUM SA. Mr. Asimakopoulos said that “10 years at the wheel of the HPPF and 10 years at the wheel of GSEVEE, I hope to have succeed in defending and highlighting the importance of small and medium-sized enterprises in the economy of the country”. Finally, Mr. Panagiotis Papafilippou, former President of the Federation of Confectioners of Cyprus, was awarded by Stergios Pitsiorlas, Deputy Minister of Economy and Development and highlighted that the goal of all of us must be the support of the Greek immigrants.

Check out photos from the awarding ceremony: 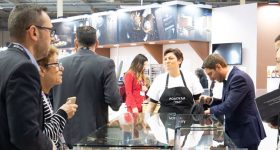 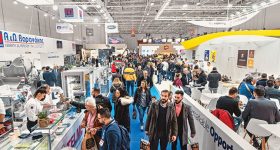 200 hosted buyers will be present at the exhibition